When Corporate Executive Chef Bill Laychur assumed his role at Pennsylvania State University in the early 1990s, he was tasked with significantly modernizing the University’s 13 kitchen facilities throughout the 100-year-old campus. 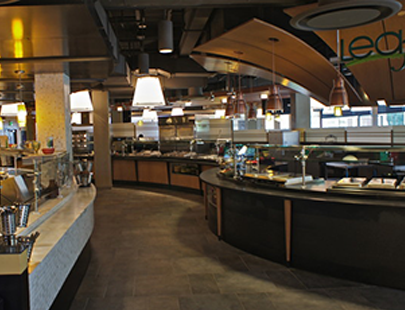 When Corporate Executive Chef Bill Laychur assumed his role at Pennsylvania State University in the early 1990s, he was tasked with significantly modernizing the University’s 13 kitchen facilities throughout the 100-year-old campus.

Laychur began his culinary career using Alto-Shaam’s original Cook & Hold Oven. However, he was limited in choosing a combi oven from an alternative brand for the renovation. He was so disappointed with the oven’s performance that he never wanted to use a combi oven again. Fifteen years later, someone suggested that he install Alto-Shaam’s Combitherm® Oven.

“I resisted installing a new combi oven at first, because I wasn’t a huge fan,” Laychur said. “I ended up installing the Alto-Shaam Combitherm Oven, and I’ve had every new version installed since. We still have the original, and it works great.”

Laychur and his team serve more than 40,000 meals per day at Penn State’s main foodservice facility. Consistency is crucial when running such a large operation.

“I have several different Alto-Shaam products, including, at minimum, 28 Combitherm Ovens, and they do not disappoint,” Laychur said. “I just love the consistency they provide.”

“If I put in a roast turkey in one facility and use the combi’s programmable feature, the turkey will come out with the same exact texture, color and flavor as a turkey cooked in a separate combi oven and a separate facility by a different cook,” Laychur said.

Laychur was so impressed with his Combitherm Oven that he now uses several different Alto-Shaam products including the Cook & Hold Oven and Cook & Hold Smoker Oven.

Particularly, the Cook & Hold Smoker Oven provided a much greater yield than expected for Penn State’s foodservice team. Using real wood, real smoke and Halo Heat® technology surrounding the oven cavity, the Cook & Hold Smoker is designed to retain moisture and does not dry out or overcook food. According to Laychur, they went from a 25 percent yield loss to less than 10 percent yield loss. Thanks to the higher yields, Penn State saw much less food waste and reduced food costs.

“If you put a piece of smoked meat in front of me, I’m a very happy guy,” Laychur said. “The smokers allow us to preserve the utmost flavor and moisture like no other smoker I’ve ever used. Plus, you can program optimal yield and optimal flavor settings which are very user friendly.”

Laychur recommends Alto-Shaam products when cooking items other than meat, too. Particularly, he recommends the Combitherm Oven for cooking vegetables. Penn State previously used outdated steamers to cook vegetables, with few students choosing the side dishes.

“Now that we use the Combitherm’s roasting features, the vegetables come out with the perfect color and texture,” Laychur said. “Students are going wild over the roasted veggies.”