The Deck Kitchen + Bar at Pacific Gateway Hotel in Vancouver needed an oven that could provide the consistency and quality to serve as many as 3,500 customers per week during their summer peak season. 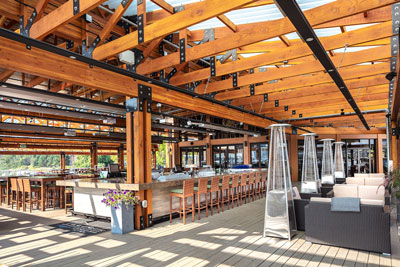 The Deck Kitchen + Bar at Pacific Gateway Hotel in Vancouver needed an oven that could provide the consistency and quality to serve as many as 3,500 customers per week during their summer peak season.

Executive Chef Morgan Lechner was in the process of expanding his menu, as the restaurant approached its reopening. The renovation began in 2015 as a part of a major reconstruction of their marina along Vancouver River. Pacific Gateway Hotel built a new 7,000 square foot deck off the front of the restaurant, refreshing everything from the dining space to the kitchen and utilities.

After exploring various options with his foodservice equipment dealer, Lechner was impressed with the unmatched food production and quality of Alto-Shaam’s Vector® Multi-Cook Ovens. Vector offers up to four oven chambers in one, each with independent fan speed, temperature and cook time control.

“We were primarily looking for an oven that could help us add thin-crust flatbreads to our menu,” Lechner said.

“We went with the Vector because it had multi-chamber cooking at different temperatures, and the simplicity of use made sense for our restaurant.”

“There’s not much that you can’t do with a Vector,” Lechner said. “The programming is one of the simplest things I’ve ever worked with in a kitchen.”

The Deck prepares a wide variety of food items, including toasted bread, roasted vegetables, brownies in a cast iron pan, and specialty flatbread pizzas. With Vector’s exclusive Structured Air Technology®, all of these items can be cooked at their ideal cook settings simultaneously and with zero flavor transfer.

Lechner said the consistency and programmability are some of the most impressive features of Vector.

“We have seen improved consistency regardless of which cook prepares the food,” Lechner said. “In a convection oven, food can be unintentionally left in the oven for an extra minute or two, causing inconsistency from time to time. This way, the food goes in, stops cooking when it’s done, and the oven lets the cook know when it’s ready.”

Additionally, The Deck also has Alto-Shaam holding cabinets that are older than Lechner’s 13-year tenure at the restaurant.

“Impressively enough, we have four Alto-Shaam units, food warmers mostly, that are 15 or 16 years old and still going strong,” Lechner said. “We once made the mistake of not buying Alto-Shaam, and the units gave us nothing but problems. Alto-Shaam has been worth the investment.”