Used mainly for roasting chicken and pork, the Combitherm ovens at River Roast combine multiple cooking functions into a single appliance, providing endless versatility, reliability and unmatched performance. It is the all-in-one solution for efficient and consistent volume food production, saving River Roast valuable time. These units are an ideal alternative for the convection oven, smoker,steamer, fryer, kettle and dehydrator. 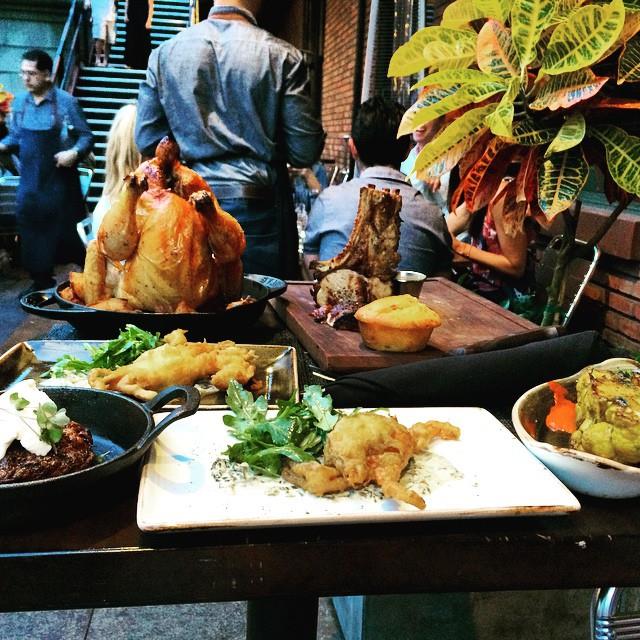 A year into business, River Roast in downtown Chicago is a culmination of good food, fun times and picturesque views as diners eat along the Chicago River in the middle of the city’s skyline. This Midwestern city is known for its hot dogs and deep-dish pizza, but at River Roast, the restaurant distinguishes itself by going beyond tradition and providing fresh, quality meals with the ambiance of waterfront dining, complete with its signature dish: smoked and roasted whole chickens carved tableside.

River Roast restaurant is the result of a trip to London between two good friends, Tony Mantuano and John Hogan. Both renowned chefs, Mantuano and Hogan dined at several roast restaurants while overseas and realized that a similar concept would go over well in Chicago. By July 2014, River Roast opened its doors in downtown Chicago.

Located on the Chicago River, the restaurant specializes in contemporary American tavern food that is satisfying and comforting.  With only five main courses, River Roast serves perfectly roasted chicken, fish, and other dishes that are carved tableside, right next to the customer.

“It’s Sunday dinner, seven days a week,” said Hogan. “The food is really fun and approachable for the customer, plus it’s the perfect location to gather with friends and family.”

Mantuano and Hogan have both been in the restaurant business since 1979, cooking at some of the finest restaurants in the world. Mantuano, a James Beard award-winning chef, and Hogan, who has opened  some of the best restaurants from Chicago to France, knew that in order to dish out high-quality menu items in a timely manner, the right equipment was needed. In late 2013, Mantuano tested out the new CT PROformance™ Combitherm® oven from Alto-Shaam and was sold.

“I was impressed by how much the combi could do and the difference it made with the chicken,” noted Mantuano. “It’s an amazing product.”

River Roast employs around 80 people, with 15 employees in the kitchen staff that serves on average 2,000 guests a week. Equipped with both a show kitchen and large prep kitchen, the 20,000 square-foot restaurant has four Cook & Hold ovens and two CTP7-20 combi ovens from Alto-Shaam.

Used mainly for roasting chicken and pork, the Combitherm ovens at River Roast combine multiple cooking functions into a single appliance, providing endless versatility, reliability and unmatched performance. It is the all-in-one solution for efficient and consistent volume food production, saving River Roast valuable time. These units are an ideal alternative for the convection oven, smoker,steamer, fryer, kettle and dehydrator.

For the chickens, Hogan cold smokes 6 to 24 birds each morning for 20 minutes.  When he is ready for service times, he roasts the birds, allowing the chicken to be freshly cooked before being carved at the tables over roasted and fried potatoes. While in “turbo” mode in the new PROpower™ setting, the Combitherm operates up to 20 percent faster than other combi ovens and up to 80 percent faster than conventional technology.

This allows Hogan to cook the signature whole chickens three to four minutes faster -- in 23 minutes versus 26 minutes, allowing him to get one more batch cooked per day if needed. Also, with the ability to preheat up to 575 degrees Fahrenheit, recovery times are shortened considerably, further increasing speed and technology. Hogan also uses the Combitherm for cold smoking salmon and roasting lamb ribs.

“The results on the chicken are incredible,” said Hogan. “We considered other brands, but the other ovens couldn’t come close to the final product that you get from Alto-Shaam.”

Hogan also uses the Combitherm ovens for the racks of pork by first smoking and then cooking the meat. He utilizes the ProTouch™ programmable recipe feature to set up a customized recipe for the pork, delivering remarkably consistent results at the touch of a button.

“The programmable ability is great for me and my staff because it gives us consistent results, taking out any guesswork,” remarked Hogan. “I also love the duality of the smoke and roasting features on the Combitherm. It allows me to go from cold smoking right into the roasting process, saving me time.”

Other beneficial features of the Combitherm include the CombiClean® automatic cleaning system and retractable rinse hose, the CoolTouch3™ glass doors prevent additional heat loss and increase safety and cooking efficiency, and the zero clearance design, which allows the equipment to be placed anywhere on the line, saving valuable floor and hood space. The Combitherm also has EcoSmart® Technology, which uses 80 percent less water, provides 60 percent more production, and is 40 percent more energy efficient than conventional cooking technologies.

Although this was their first time with the Combitherm ovens, Mantuano and Hogan have both used Alto-Shaam’s Cook & Hold ovens many times in the past. Founded in 1956, Alto-Shaam is the inventor of the original Cook & Hold oven that revolutionized low-heat cooking and the commercial cooking industry.

“I’ve used their Cook & Hold ovens for years and have always had success with them,” said Hogan.  “It’s a necessity in our kitchen because it allows us to cook something overnight and have it be ready to go in the morning.”

The Cook & Hold ovens are used mainly for beef, cooking everything from Angus loin to whole top butt steaks at River Roast.  What sets the oven apart from competitors on the market is the Halo Heat® technology. Other products result in dried-out, overcooked food and wasted energy. The Cook & Hold oven cavity is surrounded by soft, gentle Halo Heat to evenly cook food without fans, forced air or added humidity. This eliminates waste from overcooked foods, cutting down on shrinkage and resulting in a larger yield for Hogan, saving him money.

Another benefit of the Cook & Hold oven is that it has very low emissions and requires no external ventilation. Since traditional hoods cost about two dollars an hour to operate, this can save up to $30 per 16-hour day.  The oven will also immediately begin heat recovery if a door is left open due to SureTemp™, an automatic temperature recovery feature.

“Alto-Shaam has made it quite easy to produce top quality menu items, quickly and without hassle,” said Hogan. The combis and Cook & Holds result in an incredible final product. There’s really nothing else like it.”